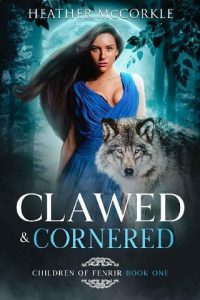 Sonja Michaelson has a monumental taste for bad men. So, when an alpha male in motorcycle gear walked into her bar and snatched away a dart aimed at his head, she wasn’t surprised by her reaction. She fell so fast and hard her impact could have leveled a small city.
Whether the connection would turn into love or remain just lust didn’t matter. The damage had already been done.
Raul Anderson’s mission was simple. Find the girl, convince her to turn, bring her back to Hemlock Hollow, and in doing so, save his sister’s life. His target had been primed by a father who loved the lore of their culture and kind, so it should have been easy.
He expected a half-Swedish, half-Cherokee princess used to having everything handed to her. One who would jump at the chance of quintupling her lifespan by becoming a werewolf.
But when he saw the black-haired beauty, holding her own behind the bar and working her butt off to pay her way through med school, it threw a wrench into his plans. And hooked him deep in the heart.
Would love surmount the divide between them or damn them before it even began?