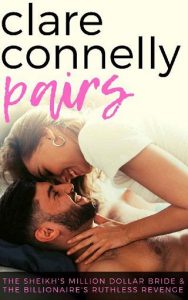 The proud, powerful Sheikh Malakhi al-Sitar has no intention of letting his young nephew -also his heir- leave the Kingdom of Ishala, especially not with the boy’s impetuous, beautiful, and rather alluring Australian aunt. The single kiss they’d shared years earlier has burned his memory banks ever since, and now he has a way to keep both her and the child in his life.

Evie is floored when Malakhi proposes to her in exchange for allowing her to stay in the country and be involved in her nephew’s upbringing. Faced with losing her beloved nephew forever and marrying a man she’s desired body and soul for as long as she’s known him, Evie can make only one decision.

A dark marriage based on desire, grief and the bonds of family is forged, but can it withstand the ravages of the truth? Will Evie be able to stay married to the Sheikh when she discovers that he’s manipulated her completely? And will Malakhi ever forgive himself?

The Terms of their Affair:
Her pleasure is his power!
Caradoc Moore’s reputation as a heartless bastard is well-deserved. The Wall Street tycoon has gone through life without caring for another soul. He doesn’t need friends. He doesn’t need family. He has money — a fortune he’s made by bringing his rivals to their knees.

So when this ruthless billionaire comes across the angelic Seraphina James, he knows he will possess her only for so long as it suits him, and then discard her. But a taste of Finn isn’t enough, and desire morphs into a dark infatuation that he’s powerless to control. Faced with the possibility of needing someone else for the first time in his life, Caradoc knows the only choice is to walk away from the dangerously beautiful Seraphina and all the emotions she sparks in him. Walking away, though, isn’t always easy…