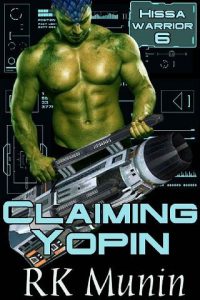 Mouse might be a small human female and Yopin the most massive Hissa warrior there is, but it turns out they’re well matched. Mouse is anything but frail and Yopin is smitten.
After being rescued from a derelict spaceship by Hissa warriors, Mouse finds herself transported off to the distant planet of Bicoma to recover. The Hissa are kind and welcoming to her as she recuperates, overjoyed to have found another Decanted human female. Decanted humans are mix of human, Hissa and a few other species’ DNA that are then grown in a vat.
Turns out that Decanted human women are breeding compatible with the Hissa. The Earth company that made them sold as most of the Decanted children as slaves away from Earth system so the Hissa are busy tracking down every Decanted woman they can find.
All of this means that every Hissa warrior she meets hopes she’ll pick him as a mate.
But every time they try to get close to her, they cause her pain. Sometimes it’s bad enough to bring on a panic attack. She needs to get away. But the Hissa are much too diligent in guarding her against threats, making it impossible to sneak off Bicoma. She has no choice but reveal a secret that will force them to allow her to leave—the existence of her sisters.
Although they are at war with the Kaklans, the Hissa agrees to let Mouse travel away from the secure Bicoma system to retrieve her sisters. When she requests the massive Hissa warrior Yopin as a personal guard, everyone’s mildly surprised.
What none of them understand is that for Mouse, Yopin is everything calm. While all the other Hissa men make her head hurt, Yopin acts as a shelter for her easily overwhelmed brain. She’s never explained to anyone what she can do, fearful that once information about her ability gets out, the Hissa might overreact.
Yopin’s serene presence makes it easier to keep her secrets safe.
But all those secrets will start to unravel and to her surprise, Yopin fights to remain at her side.
Yopin has no intention of letting his little Mouse down. He would move planets to see that she gets what she’s dreamed of, all her family together in a safe place. And he is big enough to make it happen or die trying.