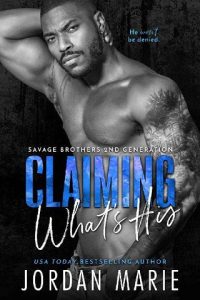 She needs someone to be a hero. She’s getting me.
King has never expected much out of life and for the most part that’s exactly what he’s been given.
Hell, even his name was a joke his mother made. Still, he wore it proudly.
He’s never depended on anyone.
As the newly appointed enforcer of the Demon Chasers MC, he has a lot on his plate.
A rival club has tried to make moves, and it’s King’s job to make sure they regret it.
That’s the only thing he has time for right now.
Besides, he has secrets, and they are intent on ruining his life.
A chance meeting with a beautiful woman stops King in his tracks.
Shelby is everything he never thought he would have.
She has secrets of her own. Secrets that haunt her.
Even when she tries to push him away.
King won’t allow it.
Shelby needs someone to heal the emptiness inside—an emptiness that he understands. It’s going to be him.
He won’t let it be anyone else.
She belongs to him.