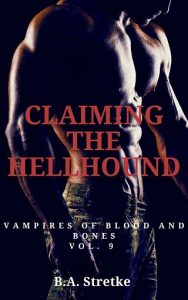 Kassius Keller has been the Sheriff of Mt. Pleasant for about a year. He’s a Hellhound, distanced from his pack looking for a new start. Master Louis DuCane of Coven DuCane has taken a shining to Hellhounds in his ranks, and when the job in Mt. Pleasant came open, Louis wanted a Hellhound managing his town. Running law enforcement in a place like Mt. Pleasant is not without its challenges. Between the plethora of paranormals, clued-in and not so clued-in human population, and a man like Master Louis DuCane running the whole show, there are few dull moments. Kass’s existence is a little solitary, that comes with the territory when you make a point of distancing yourself from your pack, but he wouldn’t have it any other way. Too much happened in the old days that he wanted to escape. One of those things, his brother Valerian, texted him out of the blue, after decades without contact, to tell him that he dropped a man off at a gas station on the outskirts of town and Kass would be very interested to meet him. Part of him wanted to tell Valerian off, but the larger part of him knew this had to be important. It turns out that text was the luckiest of his entire life.

Jasper Lee has been to the school of hard knocks and back again. Life in rural Kentucky isn’t easy. It’s even harder when you’re…different and your family makes you pay for that every single day. One day his parents just drove him to the county line and told him to get out. Nineteen years old and all he has are his backpack and the clothes on his back. Nothing around him but an empty road and rolling empty fields. He found his way to a truck stop where he met trouble, with a capital T. Luckily a kind man named Valerian was there to rescue him and offer him a ride north. North to where? He wasn’t sure. But wherever he was going was better than staying here. It turned out taking that ride would be the luckiest decision of his life.