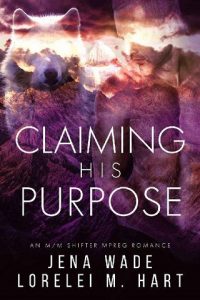 Escaping his past, means embracing his Alpha.Alpha Darren moved to Northbay after the death of his brother, looking for a new beginning—what he found was acceptance and a job as one of the pack Betas. After playing a pivotal role in protecting some pack members from a kidnapping, he is ready to just relax and enjoy his new pack. Too bad fate thought otherwise. Omega Piers came to Northbay pregnant and barely alive. They took he and makeshift pack in, treating them like one of their own with an acceptance they never had known before. He could really learn to love it there. Too bad his owner thought otherwise.When Piers and Darren met, they were immediately drawn to each other. Each a newcomer—each fleeing from their former lives in their own way. When Piers’s past catches up to him, Darren does the only thing he can to save him—claiming him as his mate. It was a mating of necessity, nothing more. Both their wolves think otherwise.