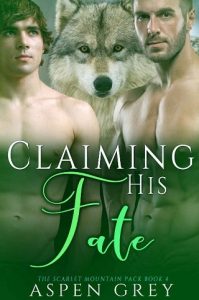 The scent to change lives…

Seth is a hardworking alpha member of the Scarlet Mountain Pack, felling trees and turning them into lumber for the lodge. He’s content with his pack, but there’s something missing in his life — a mate. One day, on what should be another average run to the mill with a fresh load of pine, Seth smells something that turns his world upside down.
Harry is living life as a prisoner, an omega slave to his cold-blooded pack leader, Kade, who rules over a pack of captive omegas forced to work, or worse, bare his children. Once they provide him with a pup, he’s done with them, and with Harry’s heat approaching, he knows he’s next.
Seth almost loses it when he smells Harry’s scent and instantly knows he is his fated mate, but Kade isn’t about to let him go without a fight. Seth tracks Harry to a truck stop and saves him from the horrible future he was certainly facing.
Back at the lodge, love drunk off each other’s bodies and scents, the two realize they are meant for one another. Fueled by desire, Harry’s heat arrives like a speeding train, sending Seth into a frenzy. The only thing on his mind? Put a baby in Harry’s belly and bind him to him forever.

But Kade’s pack is still out there, with a pack of captive omega slaves, and Seth can’t let that continue. He saved Harry, but the rest are still prisoners. Rallying his pack, Seth sets out for the truck stop, but when he arrives, Kade’s pack is gone.
Is the vicious alpha still out there? Tracking them? Hunting for Harry? And will Seth be able to save him a second time?…