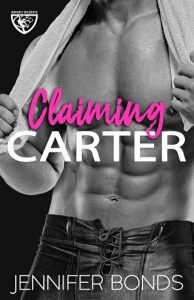 Quarterback Austin Reid’s got it all—talent, looks, women. The only thing missing? A national championship. Something he intends to rectify. With his kicker laid up and the university’s home opener in three weeks, he’s not above poaching talent from the women’s soccer team. Or recruiting a sassy, STEM-loving brunette who wants nothing to do with football or him.

Kennedy Carter is no jersey chaser. Hell, she doesn’t even like football players. They’re all swagger and no substance. Guys who like to play games on and off the field? Hard pass. She knows exactly how those stories end. But when Waverly’s sexy quarterback dangles the prospect of a full scholarship under her nose, it’s game on.

Sparks fly and the more time they spend together, the harder it gets to fight the sizzling attraction. Austin’s always done what’s expected of him, but when the clock runs out, he’ll have to decide what’s more important: fulfilling his legacy or following his heart.

This is a full-length, standalone enemies-to-lovers sports romance with a sizzling, swoonworthy HEA.