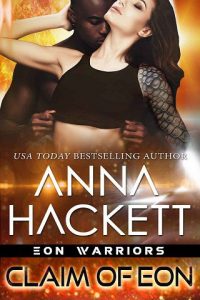 She’s an alien warrior dedicated to her job, but a tough, handsome Terran captain is a temptation she never expected.
As a female Eon warrior, Second Commander Airen Kann-Felis has fought for her career and is proud of her work aboard the warship, the Rengard. She has no time for men or frivolous pleasures, especially with the deadly insectoid Kantos causing the Eon trouble at every turn. When the Eon Empire makes an alliance with the small planet of Earth, she never expected to be working alongside a man like Sub-Captain Donovan Lennox. A good-looking, smart, and tenacious man who tempts her in ways she’s never been tempted before.

Donovan Lennox was born for space, and he’s happy to be aboard a high-tech Eon warship and helping to take down the Kantos. He’s even happier to work with the disciplined, independent female Eon warrior who is very easy on the eyes. Donovan believes in respect and pleasure, but what he doesn’t believe in is the myth of love. It was the one lesson his loser dad managed to teach him. As Donovan tries to tempt Airen into playing with him, she’s keeping her walls up, even as every second they spend together draws them closer.

When Airen and Donovan are on a shuttle mission together, they find themselves under attack by the Kantos and forced to crash-land on a deadly prison planet. With only each other to depend on, both of them will have to learn to trust each other, or they stand no chance at winning the race to survive the Kantos, or the prison planet’s dangerous creatures and bloodthirsty criminals.