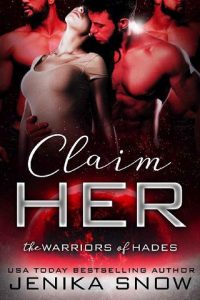 Rylan, Zarek, and Soran came from a planet of fire and stone.
One known as hell itself.
They were powerful warriors, feared by all in their galaxy, and born and trained to be killers.
But the time had come for them to settle down. To take a mate. Grow a family.
Share a woman between the three of them.
With no females on their planet, they must purchase one at the intergalactic auction—not something they were proud of, but necessary, nonetheless.
And once they had her, they’d be bound forever, dedicated only to her, and would protect her with their lives.
Tessa was a human—an almost extinct race.
After she was captured by slave traders, she was thrust upon an open market. A savage and barbaric auction.
And when she was purchased it wasn’t by just one buyer… but three.
She certainly isn’t on Earth anymore, not when she’s now claimed by three giants with fire-colored skin, eyes as black as the galaxy surrounding her, and massive onyx-tipped wings.
Can Tessa accept her fate and the fact that the three alien males are intent on not only making her theirs… but ensuring she gets pregnant with their babies?
READER NOTE: This story was previously published as Breed Her in 2014. It has since been recovered and titled, reedited, and minor plot points tweaked throughout.