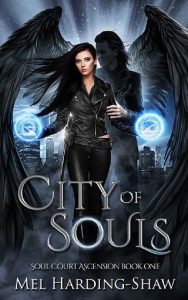 Bounty hunter Hel’s life depends on staying below the radar and passing as human. But when the infuriating Lord of the City of Souls discovers her hidden power is the key to solving his problems, he reclaims her bond-debt and drags her into the spotlight. He’ll protect her secrets on one condition: that she does everything he asks.
Winged necromancer Bastion would do anything to save the city he rules from the strange magic menacing their world. Even blackmail the angry, intriguing bounty hunter who despises him. As the rulers of the elemental courts converge to face the threat, he’s not sure who hates him more—them or Hel. The only way to keep her close is to make her pretend she’s his.
With dark magic tearing at the fabric of reality and betrayal lurking behind every corner, Hel and Bastion’s fake relationship becomes the only thing either of them can rely on. But Bastion’s past might just come back to kill him.