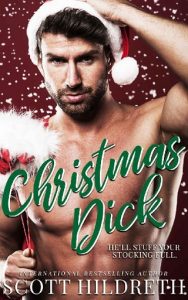 TRACEY is the office manager of Savoy Marketing, and the life of the annual Christmas party. After one too many holiday mistakes, she hopes to get through this years’ party without doing anything she later regrets. Then, four drinks into the party, she notices a tattooed biker leaning against the wall.

Knowing he isn’t an employee, and that he must have ‘crashed’ the party, she propositions him. Little does she know, he’s got secrets he’s not telling…

DICK has his Harley outside and a drink in his hand. He needs nothing more than to make it through the night without getting noticed. It’s highly unlikely that he succeeds, though. He’s tattooed, muscular, and wearing half a Santa suit.

When he meets Tracey and her co-worker, he doesn’t see it as ‘three’s a crowd’, because he knows he’s not the only biker scheduled for the night’s event…