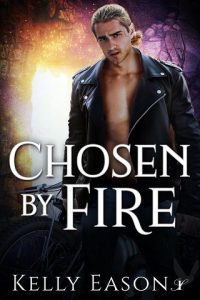 She was an ordinary mortal woman…until she learned she was chosen at birth to kill.

Dana Elliott is no small-town girl. An unknown force compelled her to abandon her life in Chicago and move to a tiny town in the mountains of north Georgia. Now, a year later, she’s bored and frustrated with her zero social life and on the verge of quitting her college professor job and leaving town.
Then she meets Jerome Kendall, a gorgeous, motorcycle-riding, immortal hunk who is literally hotter-to-the-touch than any man she’s ever known. As a member of the Flame clan, Jerome can control fire and become invisible whenever he wants. But he desires only one thing – revenge for the death of his closest friend, Samuel.
Uriah, the evil leader of a gang of cannibal mutants who is kidnapping and caging humans at the bottom of a deep gorge, and the man who murdered Samuel, becomes the target of Jerome’s deadly revenge. Unfortunately, Jerome can’t kill Uriah himself but he’s stunned to discover that Dana, a beautiful, mortal woman, was destined at birth to be the only one who can kill Uriah.
After learning some shocking secrets about her and Jerome’s family, is Dana willing to take on the challenge of a violent and potentially lethal combat to kill the mutant leader? And can Jerome risk the life of the woman he loves to avenge his friend’s death?