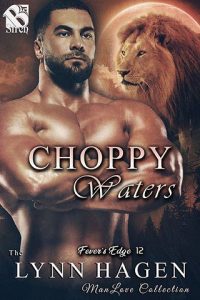 Christopher Kline saw the writing on the wall. He knows his godfather is shady, but never fathomed that he would stoop to kidnapping. When Christopher is snatched off the street, he thinks all hope is lost. Until a gorgeous stranger in fatigues breaks into the drug den where Christopher is being held captive and rescues him. Now Christopher is on the run, trying to stay two steps ahead of the hired killer, while fighting not to fall for the man who just saved his life.

Pedro “Choppy” González and his team are sent on a mission to rescue some billionaire’s son who is being held for ransom. Only things go sideways, and defying orders, he takes Christopher to Fever’s Edge instead of retuning him to his father. Choppy isn’t sure what is going on, but until he can sort things out, he isn’t taking any chances. He just had no idea he would be rescuing his mate. There was just one problem. Christopher is a male, and Choppy isn’t gay.