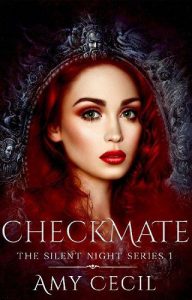 Checkmate: an act or instance of maneuvering the opponent’s king into a check from which it cannot escape, thus bringing the game to a victorious conclusion.

Serena Valentine had it all – the Blood Empire in which she was the reigning queen, a family that loved her, and subjects that worshiped her. But most importantly, she had peace. Being a living relative of the Vampire Queen, Lillith, Serena strived to maintain peace between the vampires and humans, looking at humans as a means of survival and not as the enemy.
Claus Devlin had differing views on humans and more importantly hated the fact that a woman reigned over the Blood Empire. Eventually, his way of thinking got him banished from the Empire and his intended bride, Serena. Angered by her father’s disregard for his way of thinking, Claus built an army of his own and rose up against Serena and her kingdom. He killed her family and in turn banished her from the Blood Empire.

Defeated, Serena leaves her beloved kingdom with one vow – she will return and take back what is rightfully hers.

When Serena finally returns to the Blood Empire, she comes with a vengeance. She plays the game according to Claus’ rules. She answers to his every desire and shows him every day, that she belongs to him and him alone. She is punished and treated like a common slave. But through it all her one mission is to make Claus believe that she has submitted to him completely all the while lying in wait for the right time to strike against him. When opportunity presents itself in the form of a handsome guard who is loyal to her, Serena makes her move and puts the king under direct attack from which escape is impossible.