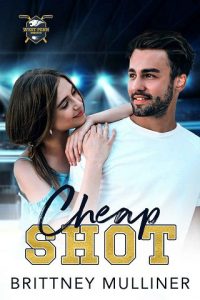 Haley has had enough hockey to last her for the rest of her life. The last thing she wants when she arrives at college is to live in her brother’s shadow but that’s nearly impossible when his face is everywhere she turns. Reid’s only focus has been one thing, make it to the NHL, until he meets the one woman that has the power to distract him. The only problem, she’s his best friend’s sister.

As much as she hates to admit it, Haley can’t stop thinking about the one person on campus she should avoid. Reid doesn’t seem to care about the reasons why they shouldn’t be together, and the longer she looks into his sapphire eyes the harder it is to resist him.

Are they willing to risk the wrath of the team or lose each other?