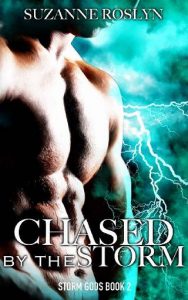 A storm was coming…

Adele has been tracking storms all her life, and the one cooking up in the desert is too good for her to pass up. He can’t stop the storm from approaching. How can he keep their paths from continuing to cross?
Only Ramiel knows how dangerous the storm can be. There’s no telling when it will strike. Revenge lies thick in the clouds and no matter what he does, Adele isn’t going away. In fact, she’s more determined with each new effort to chase the storm threatening across the Nevada skies.
He’ll have to cook something up to get her to leave, but the static between them keeps drawing them closer.
Adele has never seen a storm like the one building across the horizon. There is no scientific explanation for it or the chemistry between her and Ramiel. He can pretend, but guys who play hard to get only ever attracted her more. Maybe it’s because like a storm, catching them was what gave her the greatest rush. Only what happens when she has him?
Ramiel tries to warn her not to get involved, not to fall in love with him, but Adele doesn’t take ‘no’ for an answer.
With the storm raging over them, the secret of a goddess’s revenge on them, and static keeping them clinging together, can Ramiel keep Adele from discovering the eye of the storm? Who will be the first to find shelter and protect the other’s heart?