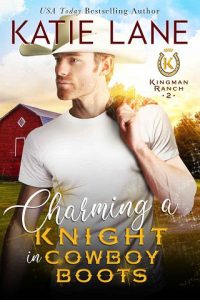 The Sleeping Beauty: The oldest daughter of the Kingman dynasty, Adeline Kingman has always been thought of as ranch royalty and a little ol’ cowgirl princess. But Adeline is no princess and her life is anything but a fairytale. For the last year, she’s been riddled with guilt and grief over the death of her childhood sweetheart, Danny, who was killed in Iraq—only days after she broke off their engagement. Her guilt and grief have her sleepwalking through life and spending way too much time hiding in her tower room at Buckinghorse Palace . . . until the town fortuneteller has a dream. A dream where Adeline is the heroine who will save her family from the scoundrel who has been plotting to destroy the Kingmans. Adeline is as much a hero as she is a princess. But when all clues lead to the ranch foreman, Adeline has no choice then to saddle up and prove Gage Reardon is more fire-breathing dragon than cowboy-in-shining-armor. Which shouldn’t be too difficult since every time Gage touches her, he sets her aflame.

The Knight: Gage Reardon didn’t expect his job as the ranch foreman to make use of the skills he learned as a Marine. But when someone starts trying to kill off the Kingmans, the hero in Gage springs to action and he’s willing to do whatever it takes to protect the family . . . even play bodyguard to the coldhearted princess who broke his marine buddy’s heart. But picturing Adeline as an evil heartbreaker is much easier to do when she’s hiding in her tower. Spending time with her makes Gage realize that Adeline isn’t cruel as much as kind. Isn’t frigid as much as a passionate woman who feels as guilty about Danny’s death as Gage does. Before he can confess the real reason he came to the ranch, Adeline will discover the truth, the villain will strike again, and Gage will have to act fast if he doesn’t want to lose the only woman who can give him a happily ever after.

Can Gage save Adeline from the clutches of the scoundrel dragon? Or will it be the cowgirl princess who rides to the rescue and saves her Texas knight with true love’s kiss?