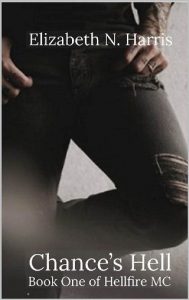 Life had never been pretty, why would it? His father had died too young, his uncle swiftly followed and he was left to watch over an angry, bitter, younger cousin. Yeah, life was ugly, he learnt that at an early age. His club went downhill and away from the values his father had instilled. He battled to get clean, his hands got dirty more than once and he put down anyone in his way. He didn’t let that bitterness stop him, he got beauty and peace for his brothers.

He saw his cousin and Rage MC get what they deserved, the stunning women who handled the Rage brothers like professional wranglers. Now he wanted his turn, his brothers their turn, he was going to get it. She’d been watching, she didn’t know he’d been looking right back at her. He had her in his sights and she was going down.
A good girl, with a love of bikes and beautiful cars, she spied on Hellfire MC for a long time, dreaming. Then he made a move and laid claim to her heart, she wasn’t ready for a man like him, who was? He took care of her and treated her like she wanted, like a precious thing. Only precious things can break, can’t they?

Did he have it in him to handle her with care, did she have it in her to lay her trust in his hands along with her heart? Hell was coming, and Hellfire is aptly named.