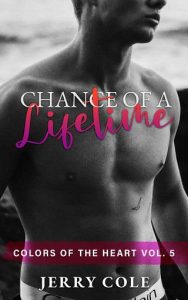 Dr. Robert “Rob” McIntyre is a hopeless case. At least, that’s how he sees himself when it comes to matters of the heart. It hadn’t been that long ago that he had had a crush on a sexy ER doctor who eventually found his one true love. Someone who was not Robert McIntyre.
Now history is repeating itself. This time, the man is younger, almost seven years, and almost as out of reach than the sexy ER doctor. Would he never learn? But his heart races whenever he’s remotely near Chance McKenzie.

Chance is a friendly acquaintance who frequently stars in Rob’s hottest fantasies. But unlike with anyone else before, Rob wants to keep Chance, to treasure him, to protect him. He wants to love him! Pity he doesn’t have the first clue how to go about doing that.
Chance McKenzie can’t imagine a world in which Dr. Robert McIntyre, the disturbingly attractive ER trauma surgeon, would ever want someone like him. Aside from the age gap between them, Rob is a highly esteemed doctor and Chance is…nothing. He has a master’s degree in psychology, which only means he’s smart enough to fool people into thinking he knows what the hell he wants to do with his life. But he’s young and currently unemployed.

All he wants to do is paint and make bold sculptures, but art won’t pay the bills and he’ll be damned if he keeps living off his older brother. If Channing is killing it as a law clerk, on his way to working in family law — and Chance will never admit to being jealous of his twin’s achievements — he can find his own success. He just needs time, without the distraction of a hot doctor whom he wants to be with like he wants air.

Please Note: This is the Fifth Volume in the Colors of the Heart MM Romance series. It contains adult language and steamy adult activities, it is intended for 18+ Adults Only. Novel, approximately 74,000 words in length. HEA (happy ever after ending). Does not end with a “cliffhanger.” Themes includes: Medical drama, age different, hesitant heart, falling in love, emergency room doctor.