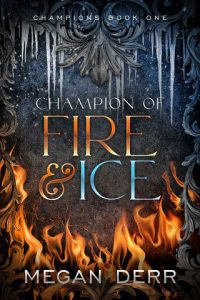 Two years ago, while he was away on a diplomatic mission, Davrin’s best friend was murdered in cold blood. Finally home, with the mourning period ended, Davrin is determined to have justice—but as a noble, the law forbids him from fighting Lord Tekker directly. Instead, he must have a champion to face off against Tekker’s champion. When he issues the challenge, however, no one steps forward to be his champion, leaving Davrin humiliated and despairing.

Cimar may only be an archivist now, but he earned his spurs the same as any knight, and he hasn’t allowed his skills to lapse over the years. Though he did not arrive in time to answer as champion at dinner, he does see Davrin in the dark hours of the night—and infuriates the king, Tekker, and his slimy champion Grayne when he arrives in the morning to make the challenge official.

Though Cimar and Grayne are matched in skill and their rare ability to shift, Grayne and Tekker have the king’s favor, and Grayne’s hellhound form is nigh unbeatable. If Cimar is going to win the challenge to avenge an old friend on behalf of a man he’s always secretly loved, it’s going to take every skill and trick at his disposal—and a whole lot of luck.