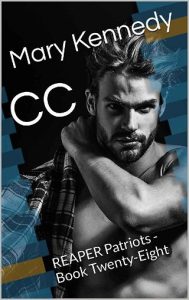 Charles Corbett Reilly served his country faithfully, waiting and biding his time until he could come home and convince Eva Harris that they belonged together. He’d kept his distance, given their age separation, but it was different now. She was a grown woman with a grown woman’s mind and body. But when he approached her to ask her out, she pushed back, something she’d never done before. CC wasn’t about to give up, chasing her all the way back to her apartment. But when she tells him the ‘why’, there’s only one alternative. Marry him.
Eva Irene Harris has been in love with CC since she was technically just a little girl. For the last five years, as she’d matured and grown into a woman, she knew that her day would come to have him for her own. But sometimes life stinks. She never thought that when he chased her down it would be her chance at happiness with him. Except CC is a hard man to turn away. Her challenge now isn’t loving CC, it’s giving up something she never wanted in the first place. But aren’t those the things we sometimes hold onto the tightest?