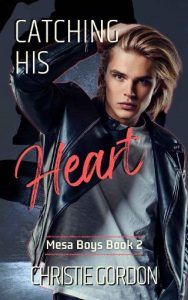 Shane realizes his love for Carter never stopped. Carter realizes a second chance is just what he’s looking for.
Shane Campbell fell in love with Carter, the boy next door, the boy he protected from an abusive father, but after his mother divorces and moves them to New Mexico, Shane decides in order to move on with his life, he must ghost Carter. When he finishes college, Shane finds himself back in Arizona, working as a graphic artist and web designer. What he doesn’t expect, is to find Carter clear on the other side of town, sitting in a bar with openly gay men.
Carter Davis struggles with his attraction to men after hearing prejudiced slurs thrown by his father all his life. He’s been told by the bartender at the local hangout that there’s a man who wants to meet him. What he doesn’t expect is that the man is Shane, his old best friend, the one who moved away and never spoke to him again.
Shane makes it clear this time around his intentions are more than friendly and seeing Shane again brings Carter’s repressed feelings to the surface. As they navigate through Carter’s need to take their new relationship at a slower pace, Shane’s ex-boyfriend shows dangerous stalker behavior. Meanwhile, Carter’s mother is in danger from his father and Carter needs Shane’s help. With two men threatening them, how do they sail across dangerous waters together?