Home
Paranormal / Sci-Fi
Cat out of Hell, Vol. I by Candace Blevins (ePUB) 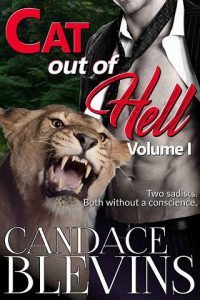 Cat out of Hell, Vol. I (Out of the Fire #4) by Candace Blevins – Free eBooks Download

Becca was traded to the Hell realm when she finally messed up enough to receive a death sentence. At first, she’d preferred Hell to death most days, but once she was traded to a different Lord of Hell, even a painful death would’ve been preferable.

The Amakhosi couldn’t leave Becca in the situation she’d landed, but what to do with her if he could get her back? She’d earned her death sentence and couldn’t be trusted on her own, but what if her years in Hell had changed her?

After two thousand years of life, Kendric has never found another soul so much like him. Letting others see his preferences and penchants once set him up for assassination, and it got Becca sent to Hell. Could he teach her how to hide her true nature and play by the rules of society when in public? Most importantly, after the decades of abuse she’s survived, could she ever enjoy intimacy with a man? Was this his punishment for breaking so many people over the centuries, so when he finally found his soul mate, she’d been irreparably broken?

This is book one in the Cat out of Hell trilogy. It takes three full-length novels to tell Becca and Kendric’s story.