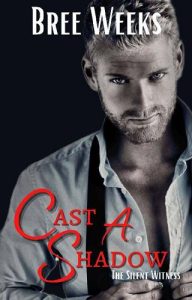 Isabelle Yates:
I became a cop to honor my grandfather who was killed in the line of duty when I was a kid. I left the force and, along with my cousin, started my own private detective agency when I couldn’t escape my obsession to bring his killers to justice. I’ve lost friends and lovers because I just couldn’t let it go. It’s been all I’ve thought about for years.
Now that I have my first real lead in eons, I’m not going to let it go. I’m close. Closer than ever, and no one’s going to stop. Especially not Hayden Watkins. He’s charming, rich, and possibly the hottest thing on the planet, but he’s also the grandson of my prime suspect, and therefore, he’s a means to an end for me. But, he has his sights set on me, and I don’t think I can keep my heart out of his grasp and my head on my mission.

Hayden Watkins:
She’s determined to bring down my family, and I have half a mind to let her. I’d first heard her name years ago when she was some young, hot-shot cop who was asking the wrong people the right questions. She’s on my brother’s radar, and that’s not a safe place for her to be, or anyone else for that matter. Including me.
The fear of a long-buried family secret being exposed has my brothers on edge and it’s all about to hit the proverbial fan. What they don’t know is that I’ve already determined Isabelle Yates is mine, and I will keep her safe. Nothing is going to stop me from having what’s mine.

*Cast a Shadow is book one of The Secret Witness, a companion series to the Savage Witness series by Kyra Nyx and Bree Weeks.