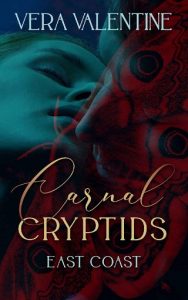 Desiderata needed a drink. After a long day of dodging darts and heckling tourists from her balloon game booth on the Wildwood boardwalk, she just wanted to forget her looming housing angst for an hour. When heavy flirtation and a cocktail from a suave substitute bartender shakes up her evening, things are looking up.

Until, of course, she catches him making out with a hot college guy not five minutes later.

In an attempt to forget the sinfully sexy stranger from the night before, Desi agrees to a dinner date with the eyeful of tall, dark and handsome that shows up at her job the next day. There’s just one little catch: he’s apparently already dating the two guys from the bar.

For JD, a shift behind a Jersey shore dive bar was always the same: predictable, boring, a little bit sticky. So what was it about this gorgeous brunette that instantly had him on the rocks? One look at her brought out the beast in him – and a desperate hope that she might be what he and Penn need to save Will for good. After over a century of struggle, they were due for a win – and someone who really believed in them.

One night.
That’s all they’ll need to get Desi to agree to.
But it’s going to be one hell of a night.

Carnal Cryptids: East Coast is a paranormal RH monster romance, which means that the female main character is attracted to more than one male love interest, and doesn’t need to (or want to!) choose. The monstrous men that love our heroine – and each other, quite frequently – all bring elements of horror, fear, interesting anatomy, and urban legend / cryptid goodness to the mix.