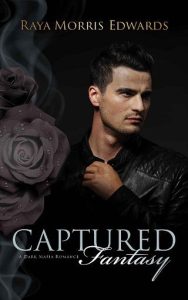 Lorenza:
After the death of her husband, thirty year-old, Lorenza Russo finds herself pulled into the upper social class of the Italian-American mafia.
Caught between her financial guardian, Federico; powerful underboss, Lucien; and her close friend, Amadeo’s grief, Lorenza begins to lose her identity outside of the affluent men surrounding her.
Until she meets Cosimo Barone.

Cosimo:
Twenty-three year-old, Cosimo has spent his entire life in the mafia, his future as underboss already planned out.
As he steps into his new role, he finds himself distracted by the newest addition to the mafia social scene, Lorenza Russo. She’s beautiful, calculating, and magnetic, and he can’t stay away no matter how hard he tries.
But can he stand up to the powerful men around her and win her over despite the odds?

*This book is set before Captured Light. It contains a love triangle, (but no cheating), and has a happy ending between the two main characters.
This romance contains a lot of adult content, so please be aware of that before deciding if this is the book for you.

Captured Fantasy is a standalone set in the same world as Captured Darkness, Captured Light, and Captured Solace.