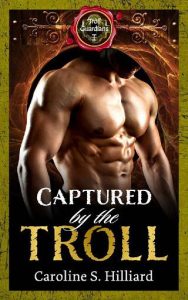 What would you do if you were kidnapped by a gorgeous mountain troll? Fight him to escape? Or trust his tale of an honorable purpose?

Anita has always believed herself to be human. She didn’t even know there was another option. But when she is kidnapped by a huge, gorgeous man claiming to be a troll, she is faced with a choice. Believe him or fight him.
He spins a tale of magic and creatures from a dark realm, and apparently Anita is essential in maintaining the barrier between the worlds. It is a shame that such an attractive man is insane. Or is he?
The awakening of her magic throws her into his arms. But her duty to the realm comes with rules. She is not allowed to touch him.
Magnus is ordered to capture the one woman who can keep humanity safe. She doesn’t know about her heritage and duty, and she doesn’t believe him when he tells her.
Surprised by her lack of fear and fierce determination to escape, he is unexpectedly drawn to her. And even as he vows to support and protect her, he craves more. But according to the old laws their love is forbidden.