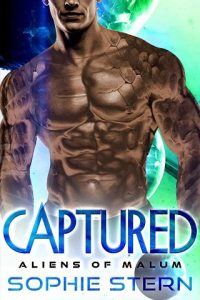 She’s a hunter. He’s running for his life. Will she be fast enough to save him?

Grixei doesn’t do relationships. She’s far too busy to get involved in anything like that. Guys didn’t make it onto the top ten items of her to-do list. In fact, they didn’t make it on the list at all. As a professional bounty hunter, Grixei takes pride in her ability to focus and stay on target. She’s the best of the best, but then she gets a mark she can’t resist.
Cooper isn’t like the other Malum citizens she’s known. In fact, he seems to be from another planet entirely. It’s not just his copper-colored scales that are different, it’s his entire attitude. Instead of forcing her to hunt him down, Cooper walks right up to Grixei and offers her a proposition.
The deal he offers is something she should probably refuse, but she can’t.
After all, would you turn down an adventure if it meant getting everything you’ve ever wanted?

CAPTURED: AN ALIEN BRIDES ROMANCE is the fourth book of the Aliens of Malum series. It features steam, swearing, and a whole lot of sass.