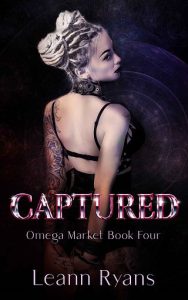 Flea had always been called a bit wild. Rebellious even.
She did her best to make a nuisance of herself. Growing up in the underbelly of a derelict city where she rarely saw the light, giving in to her omega nature would get her killed.
Being caught and taken to the Center didn’t stop her. There were new laws in place that she used to her advantage. And when the opportunity presented itself…
She escaped.
She’s on the run but she’s back in her element. She knows they’ll be coming for her again, but she’ll do anything not to be Captured.