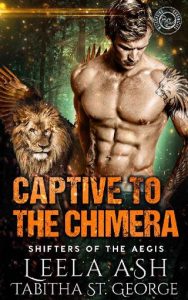 He needs her, and if she won’t come willingly, well then he will have to TAKE her…

Maddie Hunter, a gifted Witch Hare, spends her days in dull research. But her safe, comfortable world is shattered when a mysterious stranger kidnaps her and carries her far into the desert. There her captor demands she fix an unsolvable problem – and refuses to release her until she does.
Griffin Davis doesn’t give a damn about Maddie. Haunted by his past, he hides a deadly secret – one that will turn the entire Shifter community against him if it’s revealed. To him, the Witch Hare is just a tool. One that stubbornly refuses to obey.
Despite his distrust, passion flares between them. United by Fate, driven apart by the past, they fight to find a future. For Griffin there is only one path forward: flight. A life on the run, lived in the shadows. Maddie’s cheery optimism cannot dispel his fear, the legacy of his dark heritage.
When the loathsome Fangs of Apophis unleash a terrible evil on the world, Griffon’s ‘curse’ may be their only hope. As Maddie finally learns the awful truth that lurks behind his ‘paranoia’, she discovers that saving the world may mean losing her new love…