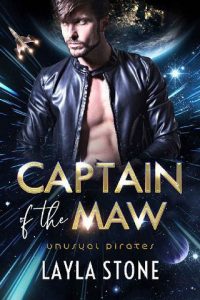 With all his skills and abilities, Kava never thought he’d hit rock bottom.
But after his ship was destroyed, his crew annihilated, it couldn’t get worse.
He shouldn’t have been too hasty…
Soon after the destruction of his treasured ship, he stood face to face with the woman who destroyed his Federation career and his pirate legacy. And he couldn’t kill her. Not that he didn’t want to, but something inside him wouldn’t let him.
So bit it, but he would get his revenge one way or another.
Except, nothing is simple when it comes to Fenton.
She’s brilliant and honest and has connections any pirate captain would kill for. She’d be an asset to the new crew.
But when she saves his life instead of leaving him to rot, Kava has to reevaluate his strategy from enticing her to be a part of his crew, to be his mate.