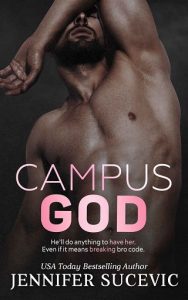 Crosby Rhodes is considered a god when it comes to Western Wildcats football.
And who knows?
Maybe he actually is one. There’s certainly no shortage of girls on campus who agree with the sentiment. They swoon over his pretty face, dark messy hair, and hard body honed from years of lifting and two-a-day practices. That alone makes him catnip for the female species.
Add a lip ring and surly disposition to the package and you can understand what all the fuss is about.
Would I be included in that majority?
Hell, no.
As far as I’m concerned, Crosby can eat shit and die. The guy is a major jerk. Not to mention, a pain in my assets. And that’s putting it nicely. For reasons I’ve never understood, he goes out of his way to humiliate and hurt me. His barbed comments are always a direct hit before exploding on impact.
I’d love to know what I did to elicit such hatred but that would involve conversing with him and I refuse to do that. There’s only one more semester before graduation. Surely, we can get through the next six months without coming to blows.
That’s the hope, anyway.
Which is exactly why I’m thrown off guard when my nemesis pulls me aside and suggests a truce. Do I necessarily trust him after everything he’s put me through?
Nope. For the time being, I’ll agree so there can once again be peace in the kingdom all the while keeping him at a firm distance. Except that turns out to be impossible. Everywhere I go, there he is. It’s like I can’t get away from him. More shocking than that, he’s actually being nice.
If stomping out the underlying attraction that constantly flares to life between us was difficult before, it’s all but impossible now. But that’s exactly what I’m going to do. I’ve been burned by one athlete, I refuse to allow it to happen again.