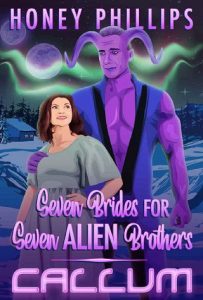 Can a weary alien warrior and a wary human widow learn to love again?

The life of a warrior is all Callum has ever known, but after a long, meaningless war he is tired of fighting. Instead, he chooses to accompany his brothers in arms to a new life on a backwater planet and finds an unexpected peace in the hard work of restoring their isolated ranch.
When his former commander finds a bride amongst the human settlers nearby, he has no intention of following in his footsteps. He learned long ago that females could not be trusted – not even the deliciously curvy female with the sad eyes who haunts his dreams.
Pearl married young – only to find out that the charming man she married was a monster behind closed doors. Although she stayed with him for the sake of her sister, now that he’s gone she has no intention of becoming involved with another male – not even the big, silent alien warrior who arouses long forgotten feelings.
When Pearl is forced to go to Callum for help, the two of them are trapped together. Is the overwhelming attraction between them enough to overcome the wounds of the past? And will an unexpected enemy destroy any chance of a future together?