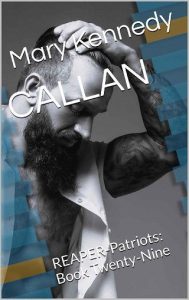 Callan Battle loved his time in the military, but owning his own tattoo shop has always been a dream for him. Inking something permanent, something personal on someone is a privilege and he’s one of the best in the south. But when his sister gets married and leaves the shop, then his two artists leave, he’s in a bind. Frank Robicheaux was the last man he thought he’d see. His offer of helping RP came at just the right time and yields a future he never dreamed of. He also never dreamed of a woman like Juliana English and all it takes is one touch, one whiff of her perfume and he knows he’s screwed.

Juliana English is the daughter of a notorious U.S. Marine and RP operative. Her mother is a prolific attorney and she’s lived a privileged and charmed life. Beautiful, smart, with more family and friends than they anyone could dream, she has it all. Except one thing. One man. Seeing Callan Battle has Juliana pulling out all the old tricks to nab him, but Callan isn’t a boy. He’s a man who’s seen tricks like hers before. She only has one option. Grow up and show him that she’s serious. A cruise to the Caribbean seems the perfect opportunity to prove that she’s changed. Except nothing is ever that easy for the men and women of RP. Nothing.