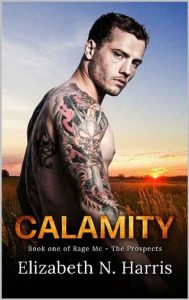 An abused child sought a home and discovered one in Rage MC. He was accepted, welcomed and finally found his place. He protected the old ladies, embraced Rages’ values and became their perfect prospect. Until the day he saw her. The Rage Princess nobody dared date. The moment he touched her, he knew she was his one. But they were too young, and he hadn’t earned his way. So he bided his time.
No one was strong enough to stand up to her father. The couple of guys she’d introduced him to, soon fled with their tails between their legs, so she gave up and concentrated on her education until him. His eyes made promises he couldn’t keep yet, but they yearned for one another. She watched from afar, no one guessing her true feelings until he brought an injured animal in and declared she was his.
He’d earned his patch, his role and his respect. The day he became a brother was his proudest but not his best. The day he walked her down the aisle would be the best. As a brother, he could now claim the hand of the woman he loved. But nothing was ever going to be easy for him. Against the anger of family, disloyalty, and betrayal, can two souls find their path together, or will he do as he promises? And give his cut up for life.