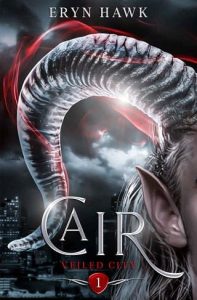 Twenty-five-year-old Luca Elliot lives in a city divided. The humans and the supernaturals mostly keep to their own kind, but Luca—curious and desperate for work—crosses the border and finds himself employed by a tall, stupidly handsome Fae with killer horns. He should be intimidated, but instead, Luca is utterly captivated. Falling for the boss is a bad idea though, right?
Cair Haryk is only a visitor to the human world and, between his position in the Fae kingdom and a bargain he made years ago, he can never remain. He’s content with that until he meets Luca—his soulmate—and hires him to work in his high-end lounge. Cair tries to guard his heart, but fate has other plans and, despite his best intentions, he falls for the pretty little human. Hard.
Luca can’t enter the Fae realm, and Cair’s time in the mortal lands is drawing to an end, so while the attraction between them is irresistible, their situation is impossible. They can’t be together. It’s tragedy and heartbreak just waiting to happen.
Isn’t it?

CAIR is a MM paranormal romance with spice, size difference, and soulmates. It features a lovable human trying to find his place in the supernatural world, and a secretive Fae who’s not as detached as he pretends to be. This is the first book in the Veiled City series.