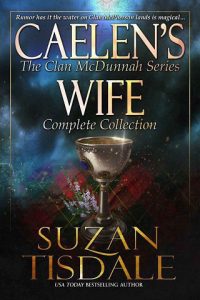 The complete collection of the Caelen’s Wife Series includes A Murmur of Providence, A Whisper of Fate, and A Breath of Promise.

Rumor has it the water on Clan McPherson lands is magical….

Clan McPherson has known peace amongst their neighboring clans for more than one hundred years. That peace is threatened when Fiona McPherson is made chief after the death of her husband.
Known more for her fighting skills than her beauty, Fiona refuses the multiple proposals of marriage that begin to seemingly arise from nowhere. She may be the chief of her clan, but she’s still a woman. It isn’t Fiona they want, but her land and she’s willing to fight to the death to keep it.

Rumor has it Caelen McDunnah has lost his mind…

Caelen McDunnah, the chief of Clan McDunnah, has no desire to remarry. He’s perfectly content to still mourn the loss of his first wife and babe, even if it has been sixteen years. Until he meets the beautiful and feisty Fiona McPherson.
Known to start a fight out of sheer boredom or madness — no one is ever truly sure which — Caelen suddenly finds himself in the middle of battles he has no desire to fight, but fight them he will if it means he can have Fiona McPherson as his own.

There is always a wee bit of truth in every rumor.