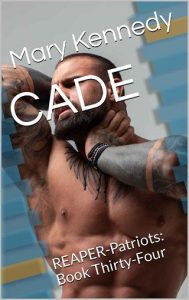 Cade Norgenson knows the look of death and he’s seen it more times than he can count. The look of death from someone willing to inflict on themselves is one he can’t seem to get out of his mind. He sees that look in Cassidy Pechkin and he’s not about to let her take her own life. She might hate him for it, but he’s going to follow her to the ends of the earth to ensure her safety. Although Cassidy is now safe, it seems someone is driving veterans to commit suicide and Cade and the team will stop at nothing to bring it to an end.

Cassidy Pechkin can’t fathom facing a future, when her past haunts her. Her behavior made her attacker more violent, more angry. It was her fault. All her fault. At least, that’s what she believes. Cade Norgenson, however, doesn’t buy that bs for a minute. When he ruins her perfect plan, she has to find a reason to go on and it just might be Cade himself.