Home
contemporary romance
Burn for You by Amanda Bailey (ePUB) 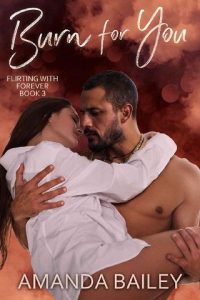 He’s ablaze for her. She’s consumed by him.

English teacher Piper Mathison’s insides get all twisted up every time she sees the blinking message notification on her dating app from the guy she’s been sexting. Strangely, she’s equally worked up by the fiery arguments that erupt between her and her new coworker Damon. She has feelings for both men, but the choice should be clear when she realizes Damon could steal the coveted department chair position out from under her.

Damon Madero has his sights set on a promotion that he desperately needs. The verbal sparring with coworker Piper shouldn’t be such a turn on and is an unfortunate distraction. Confusion over his budding feelings for Piper and her smart, sassy mouth turns to guilt whenever he thinks about the mysterious online woman he’s been slowly falling for.
Neither can afford to make the wrong choice or they’ll both go up in flames.