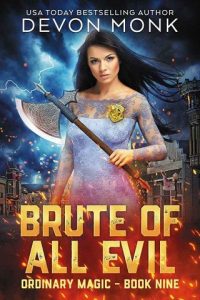 In two weeks, Delaney Reed will marry the man of her dreams. Everything is perfect. So why are the gods following her around like she suddenly needs a bodyguard?

It might be because her fiancé is forced to serve an outsider god who hates Delaney and the town she protects. It might be because the local Valkyrie hired a social media star who is determined to expose Ordinary’s secrets. Or maybe it’s because the king of hell wants to take over the world and Ordinary is standing in his way.
Whichever disaster has the gods on edge, Delaney isn’t going to let anything get in the way of walking down that aisle. But when an attempted murder and kidnapping hit with a one-two punch, Delaney must take on the pain-in-the neck gods, the nosy streamer, and all the demons in the Underworld before her chance to say “I do” is lost forever.