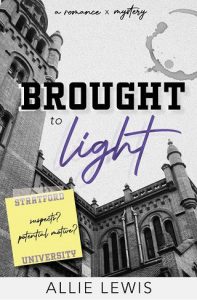 Three things Whitney is obsessed with: true crime podcasts, sticky notes, and coffee.
Two things Whitney knows for certain: she needs to focus on her future and she doesn’t want a relationship her senior year of college.
One thing Whitney never saw coming: Derek Mitchell.

When a dead body is found in the middle of Stratford University’s campus, Whitney Snow feels like she’s been dropped straight into one of the true crime podcasts she listens to every morning. She’s determined to help solve the case by whatever means necessary, but when Stratford’s golden boy, Derek Mitchell, offers to help with the investigation, Whitney isn’t so sure. Her one experience with Derek freshman year left her with a bad taste in her mouth from the guy every girl on campus seems to be obsessed with.

After Whitney reluctantly agrees to let Derek help her investigate the murder, things get even worse when rumors start spreading that the two are dating. Not wanting to rouse suspicion about what they’re really up to—especially with a potential murderer on campus—Derek and Whitney go along with this fake dating scenario. But as they work closely together to solve the case, the investigation isn’t the only thing that starts heating up. And as it turns out, the secrets buried deep within Stratford University may not be the only secrets that are brought to light.

*Brought to Light is a new adult romance novel perfect for those who love a sizzling romance (without explicit sexual content) with a dash of murder mystery.