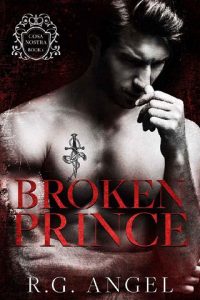 Being the daughter of the Riverside monsters is a heavy cross to bear, one that twenty-one-year-old Cassie West can’t escape. But first she needs to get her ten-year-old brother out of social care.
Social pariahs can’t be choosy and she finds a job as a live-in housekeeper at Hartfield Manor—a cursed job that no one wants.
But as the days pass, she is intrigued and determined to figure out who is the man in the shadows. The mysterious owner of the manor whose obvious pain resonates with hers.

How the mighty have fallen.
Luca Montanari turned from an adulated powerful mafia underboss to a recluse, clinically alcoholic beast with a death wish in the blink of an eye.
All he wants is to be left alone, to soak in his pain and guilt—in his own version of purgatory—until Cassie West enters his life. She is everything he doesn’t want and everything he needs. The fiery redhead starts to bring back to life parts of him he wanted dead. The closer she gets, the harder it is to remain the ghost he’d become.

Who better than the daughter of monsters to love a beast?