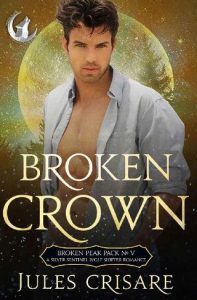 He’ll do anything to keep his pack safe and she’ll do everything to maintain her independence. They can both get what they want … but it means faking their mating.
Allard’s been hiding a secret since the first day he arrived at Broken Peak.
His mate was chosen for him before he was born.
When Delia shows up at Broken Peak, intent on convincing Allard to go through with the mating then returning to her life in Chicago, Allard has to face his past.
There’s only one problem…
Other packs want Delia.
Delia Lyall is a rarity, she’s a pure-blooded wolf shifter and an Alpha. The only thing she cares about is duty and obligation and her independence. When Allard proposes a fake mating, she falls under the protection of Broken Peak Pack. And Allard.
With Broken Peak Pack’s safety in the balance, destiny and love confront the danger head on, will Broken Peak lose its Crown and Allard lose his mate? Or will it be enough for Allard and Delia to realize their love is real and their mating is fated?