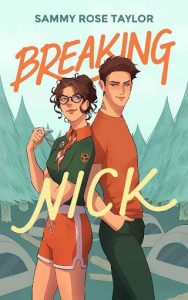 Lifelong enemies Holly and Nick are forced together on a kid’s camping trip, and after one stormy night alone in a tent, everything changes. The boy next door has always been a thorn in Holly’s side, now she can’t stop thinking about him. Slow-burn, cute, sweet, YA romcom with low spice and moderate romantic steam.

Since they were five years old, lifelong neighbours Holly and Nick have been at war. Holly loves rules, routines, glitter, and crafts. Nick likes tattoos, drinking, and Metallica. Holly is a born square, and Nick enjoys reminding her of this every chance he gets.
School is finally over at Willows High, and 18-year-old Holly plans to spend a week with her Robin Scout group. Hiking, playing games, and camping in the woods is her idea of heaven. When Nick vandalises the clubhouse, his punishment is to come along to help the Robins. To his horror, he has to care for a group of excitable seven-year-olds. All he has to do is last the week without messing up, and his father promises him a trip to France to visit his mother.
Mortified at being alone with him, her best friend Tess suggests Holly treat it as a challenge. The Breaking Nick challenge. Can she spend a week camping with a guy so opposite to her? Holly likes fixing broken things, and she loves a challenge, but Nick might be a step too far.
Deep in the woods, Nick and Holly struggle to get along. Forced to work together, they learn all they thought they knew about the other was wrong. As they get closer, they fight frustration and their growing attraction. Until one dark, stormy night, alone in a tent, everything changes forever. You can’t fight basic chemistry and lifelong hatred. Are they both too different to make things work, even if feels right?