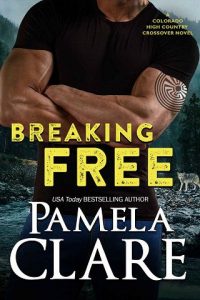 He’s the one man she can’t have…

Winona Belcourt left the Pine Ridge Reservation to become a wildlife vet in the small Colorado mountain town of Scarlet Springs. She now leads a busy life caring for sick and injured animals and watching over her aging grandfather. Apart from a complete lack of romance, her life is close to perfect. She doesn’t have time for dating, even if there were available men in tiny Scarlet who interested her. Then Jason Chiago comes to town, one of many volunteers here to help rebuild her family’s summer camp. Tall, dark, and hot as hell, he’s the friend of some friends and a member of the legendary Shadow Wolves, an all-Native unit of expert trackers who patrol the US-Mexico border. Sadly, he’s also taken—or so her friends say. Winona would never get involved with another woman’s man. Still, she can’t turn off the longing she feels for him—or stop herself from imagining the heat of his kisses.

She’s everything he wants…

As a Tohono O’odham man, Jason knows that life’s journey is filled with unexpected twists and turns. Still, he never expected to be where he is now—his ex-fiancée in prison and his job with the Shadow Wolves on the line. On administrative leave for taking out a killer on the wrong side of the border, he has come to Scarlet Springs to help rebuild a kids’ camp that burned to the ground—and to clear his head before his disciplinary hearing next month. Yet, from the moment Winona stumbles into him, he can think only about her. With her big heart, sharp mind, and sweet face, she is everything he’s ever desired in a woman. But he made a deathbed promise to his grandmother that he would never abandon his responsibility to the O’odham people and move away from the reservation like so many others have done. It’s his duty to pass on traditional lifeways so they won’t disappear and to be a role model for O’odham youth. Winona deserves better than a fling with a man who can’t stick around. That’s why he’s going to keep his hands to himself, no matter how much she makes him burn.

A love that won’t be denied…

When a wealthy rancher asks Winona to help find a wolf that is killing his livestock, Jason and Winona join forces to solve the mystery. There haven’t been wild wolves in Colorado for eighty years. But working closely side by side has consequences. As they move in on the wolf and uncover a more shocking truth, their attraction ignites into passion. Jason realizes he has a choice to make. He can either keep a vow he made long ago and break both of their hearts by walking away—or he can turn his back on his duty and his people to seize a chance at true happiness in the arms of the woman he loves.