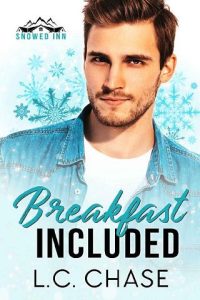 What’s worse than being stranded at a mountain resort by an avalanche three days before Christmas? Being trapped with your teenage crush—who kissed you and ran away.
Reno Pierce spends all his time creating music in his studio, quite happily alone, but at the insistence of his rom-com-loving dad, he finds himself at a Colorado mountain resort speed dating event. His dad wants Reno to bring his ‘Mr. Right’ home for Christmas, but what he finds instead is his teenage crush. Twelve years ago, he’d been head-over-heels in love with his older brother’s best friend, Tate. His straight best friend. But everything changed one magical night, when Tate kissed him like his life depended on it—and then ran away.
Six months after a bad breakup, Tate Boylan is still feeling the damage done to his confidence. Thanks to his hopeless romantic sister, who booked him a quaint cabin at a mountain resort and insisted he ‘boost his morale’ with a night of speed dating at The Retreat, he’s feeling much better. Until he sits at a table across from his best friend’s younger brother. The one he’d fallen for as a teen, kissed at a party, and never saw again.
Now that an avalanche has cut the hotel off from the rest of the world, Tate might have a chance to prove to Reno that this time he won’t kiss and run.