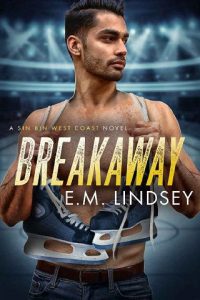 The last thing Ravi Chandola needs is to define his career by a single mistake he made off the ice. But it’s not that easy when you’re the captain of an NHL team and the press is always watching, waiting to pounce.
And to make matters worse, Ravi now has community service under the supervision of a former professional figure skater who hates him with a fiery passion. But things aren’t so simple when it comes to ice king Adrien Fischer.
He’s hot but cold.
He’s soft but sharp.
And in spite of telling Ravi there can never be anything between them, Adrien can’t seem to stay out of Ravi’s orbit.
Ravi’s life is complicated enough without this man who can’t seem to make up his mind, but as much as Ravi wants to walk away, he knows he’s in it for however long Adrien will have him. So what hope does he have left? Just a miracle that the ice king’s heart will thaw and allow Ravi in.