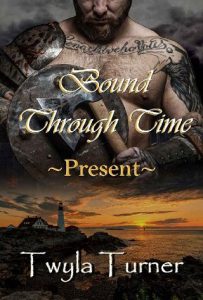 The Present. Jett Johnson has always felt inadequate next to her petite, light-skinned, slender twin sister, Nic. At six-feet-tall, a size 22, and flawless obsidian skin she has always been cast aside for her sister in their community, among men, and even their own mother. If she had to hear “You’re TWINS?!” one more time, she’d scream. The final straw comes when Jett finds her sister in her bed with her husband. Fed up and ready to leave everything behind in NYC, Jett decides to start over in Portland, Maine of all places.

The Past. Believed to be dead after an epic battle, Viking chieftain Jerrik Rolfson is given a funeral fit for a king. The only problem is, he’s not dead. The poison coursing through his veins has left him paralyzed and unable to speak. At the mercy of the deadly sea, his body is carried into a mysterious fog.

Their Times Collide. On her daily morning walk in her new town, Jett finds a charred and badly broken longboat capsized against the giant rocks along the coast of Maine. Lying inside appears to be one of the most beautiful and biggest men she’s ever seen. Finding him still alive, she jumps into action to get him help.
Once he’s awake, Jerrik finds himself in a strange place surrounded by strange people. Only the stunning dark-skinned woman he’d seen in what he thought was his dreams could calm the massive Viking.
Jett doesn’t know if the large man is crazy or delusional. But wanting to help, she’s now found herself as the sole caretaker of a giant man who believes himself to be a Viking Laird from the past.
What could possibly go wrong?