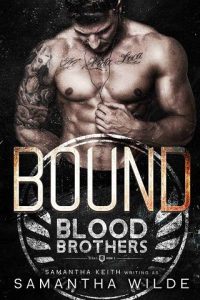 One of the most dangerous men in the country just became her only ally.

Investigative journalist Lexi Ivanov needs one thing to crack the most important case of her career: the top-secret ledger belonging to Lionsgate Kinship—the organization that murdered her family. And it’s in the possession of Nash Holmes, the elite brotherhood’s deadly enforcer. Fighting her attraction to the monster who helped take everything from her, she drugs Nash before their romp in the bedroom goes too far. And then, with the ledger in hand, she runs.

Having a woman drug and steal from him is the ultimate shame. Nash fell for the sexy seductress’s trick and now he has to pay the price. Asking for forgiveness from his adoptive father, who is also the brotherhood’s Grand Chancellor, is even more humiliating. But he’s given a mission that will allow him to redeem himself and stop the lying vixen from selling their secrets to the media: he must kill her.

Following Lexi’s twisted escape route, Nash finally locates her. Only he soon learns she has something much greater than what he’s after, and not just a smokin’ body—information so dark and deadly that he’s forced to investigate. If she’s telling the truth, everything he’s ever known has been a scam, and he’s aided the world’s most heinous criminals.